The teaching tool of the Tomatis® Method is a device called Electronic Ear. The Electronic Ear gives the muscles of the middle ear their full capacity of operation in order to remove the mechanisms of inhibition that the brain has triggered. In addition, the Electronic Ear allows the brain to capture the attention of the sound message. Gradually, he learns or re-learns to listen. Literally, it is said that the ear “listens”.

An electronic device capable of creating an alternation between two perceptual conditions of the same sound message.

Concretely and in a very simplified way, the Electronic Ear makes it possible to activate the stapedial reflex. This reflex causes contraction of the auditory muscles. It is activated by the sudden passage of low frequencies, which does not require any effort of accommodation to high frequencies which requires the ear to make an important accommodation effort. Indeed, this back and forth between the tension and the relaxation of the muscles of the ear is made possible by an electronic flip-flop which is a device capable of creating an alternation between two perceptual conditions of the same sound message. This activity can be compared to gymnastics, which thanks to repeated use and progressive mobilization of the ear, optimizes the transmission of the message to the brain. 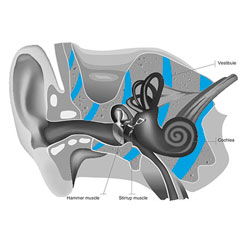 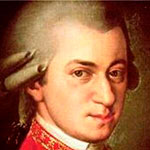 It is a fact that after much experimentation with other musics, the results obtained using Mozart’s are amazing, no matter what region in the world it is practiced: indeed, we find that on all Continents, this music is not only very well accepted, but it allows each subject to restore its own internal balance.

To understand this action on human equilibrium, we must remember that music is characterized by rhythm, which touches the body, by harmony, which reaches the emotional zones, and by the melody that appeals to intellectual structures.

Ideally, in the classical period, these three parameters had to be balanced, which was rarely the case, one or the other often being dominant, thus giving a very particular musical discourse; Now, in the case of Mozart, it seems that this balance has been achieved, which may explain the universal character of this music. 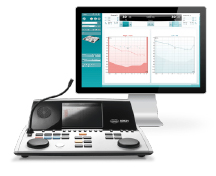 This unique device is specifically designed to allow you to determine an individual’s listening profile and measure its evolution following Tomatis® sessions. It makes it possible to evaluate in a subject the thresholds of hearing by frequency, the ability to identify the origin of the sounds, and to discriminate them as well as the lateral hearing. The Tomatis® listening test was the subject of research by the French National Center for Scientific Research (CNRS), which validates the value of this original tool.